Nitrogen is a naturally occurring chemical element, with the symbol N. In its gas form (N2), nitrogen makes up about 80% of the Earth's atmosphere. In other forms it is one of the most important nutrients for plant growth. It is also found in amino acids that make up proteins, in nucleic acids (that make up DNA) and in many other organic (biological) and inorganic (chemical) compounds. 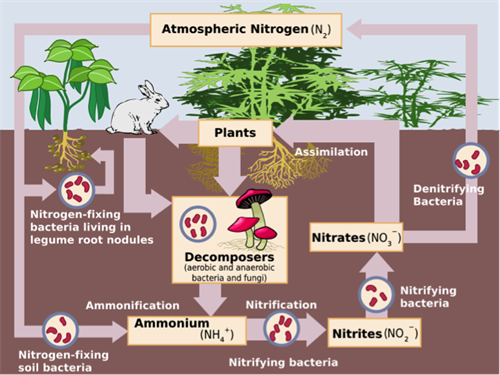 This figure shows a schematic representation of the flow of nitrogen through the environment.  Bacteria are a key aspect of the cycle, providing different forms of nitrogen compounds that can be utilised by higher organisms. Source: Wikipedia.

Nitrogen occurs as several forms in the environment:

As a gas, nitrogen is relatively inactive but can be converted to other more reactive forms by certain bacteria through a process called fixation.

Nitrate-nitrogen is the concentration of nitrogen present in the form of the nitrate ion. Nitrate is a water soluble molecule made up of nitrogen and oxygen with the chemical formula NO3. It is a very important plant nutrient but because it is highly water soluble, it leaches through soils and into groundwater very easily, particularly after heavy rainfall.

It is one of the most common contaminants of rivers, streams, lakes and groundwater in rural and urban areas. Sources of nitrate include excessive application of inorganic fertiliser, animal and human waste. Nitrogen fixation and soil cultivation can also cause nitrate leaching if poorly managed. On grazed pastures, animal urine patches can be a major source of nitrate leaching.

Once in groundwater, nitrate can persist for many years and travel long distances. Under some conditions, where aquifers contain decaying organic material that consumes available oxygen dissolved in the water, nitrate can be converted to nitrogen gas in a process called “denitrification”. This has been shown to occur on a local scale in many parts of New Zealand, and it can explain why some groundwater wells have very low nitrate concentrations when other wells nearby have much higher concentrations.

Where groundwater emerges as springs, it can be an important source of contamination in streams and lakes. In fact, transport via groundwater is probably the main pathway by which nitrogen is carried from agricultural land into surface water bodies.

In drinking water, high nitrate concentrations can be harmful to humans and livestock. The New Zealand Ministry of Health (2018) has set a Maximum Acceptable Value (MAV) for nitrate (as the nitrate ion) in drinking water of 50 milligrams per litre (mg/L) to prevent against short-term health risk to bottle-fed babies. When expressed as nitrate nitrogen, the units used in LAWA, the MAV is equivalent to 11.3 mg/L.

Read more on Nitrate-nitrogen in Groundwater

Nitrite-nitrogen is the concentration of nitrogen present in the form of the nitrite ion. Nitrite is a water soluble molecule with the chemical formula NO2. Concentrations of nitrite are normally low compared to nitrate and ammoniacal nitrogen. However, too much nitrite can be toxic. In drinking water, it can be harmful to humans and livestock.

Total oxidised nitrogen is a measure of two inorganic forms of nitrogen (nitrite-nitrogen and nitrate-nitrogen) found in a sample.  Councils who do not measure nitrate directly may use TON as a proxy for nitrate when assessing nitrate toxicity against the NPS-FM 2020.

Dissolved inorganic nitrogen is the sum of nitrite (NO2), nitrate (NO3) and ammonia (NH3), and is the most bioavailable form of nitrogen used by plants.

Ammoniacal nitrogen (NH4-N), also often called ‘ammonium’, is the concentration of nitrogen present as either ammonia (NH3) or ammonium (NH4).  These ammoniacal forms can be transformed to other forms of nitrogen and are very important plant fertilisers but are generally less mobile in the soil than nitrate. Ammoniacal forms of nitrogen enter waterways primarily through point source discharges, such as raw sewage or dairy shed effluent. It is toxic to aquatic life at high concentrations.

Ammonia (NH3) is a gas that reacts to form the ammonium ion (NH4) when it is dissolved in water. The balance between ammonia and ammonium in water depends on the pH and temperature of the water.  Ammonia is highly toxic to aquatic life.

Total Nitrogen is the sum of all nitrogen species that are found in a water sample (i.e., nitrate-nitrogen (NO3-N), nitrite-nitrogen (NO2-N), ammoniacal-nitrogen (NH4-N) and organic nitrogen such as amino acids, plant tissue and detritus).

Scientists recently found out that total nitrogen water quality measurements vary significantly, depending on the turbidity of the river water and the methodology used. Total nitrogen laboratory results were slightly higher when the TN-K method was used and lower with the TN-A method (an average of 8% less) in very turbid rivers (that is a river with Total Suspended Solids > 10 mg/L).

These new findings raise the question which method should be used by councils and whether councils may need to change the way they currently calculate total nitrogen, adjusting their methods to either TN-K or TN-A. To date, however, there is no clear answer to the question which method is ‘best practice’. Moreover, a change in methodology can cause difficulties when calculating long-term trends in turbid waters (such as flooded rivers or shallow wind-disturbed lakes prone to sediment re-suspension). We therefore recommend that until further research has been done on this subject, existing TN methods within regions should be continued to maintain sampling continuity for trend calculations.

Why is too much nitrogen a problem?

Nitrogen is an effective fertiliser and essential plant nutrient, but increased concentrations in water can cause negative environmental effects. Some forms of nitrogen can become toxic to aquatic life at high concentrations, particularly under certain temperatures and pH conditions.  This can cause direct harm to fish and macroinvertebrates.  The assessment of ammonia and nitrate concentrations defined as attribute bands in the NPS-FM 2020 apply only to these potential toxicity effects on aquatic ecosystem.

Excess nitrogen (at lower concentrations than required to cause toxicity effects) can also contribute to rapid growth of aquatic weeds and algae in rivers, streams, lakes, estuaries and the ocean. Commonly, this can result in plant or algal blooms. As the plants then die and the excess organic material decomposes, oxygen in the surrounding water is used up and in severe cases this reduction of oxygen poses a threat to aquatic life. When assessing risk of nutrients driving problematic plant and algae growth, scientists often look at the combination of multiple forms of nitrogen including the dissolved nitrogen (collectively referred to as dissolved inorganic nitrogen, or DIN).  There are no attribute band definitions for DIN in the NPS-FM 2020.

In drinking water, the nitrate form of nitrogen can be toxic to humans and other animals at high concentrations (see the discussion on nitrate above).

Where does nitrogen come from?

How to test for nitrogen?

Water samples are collected by local authorities and sent to laboratories. Each form of nitrogen requires a different chemical test.  The majority of local authorities use methods that follow the American Public Health Association (APHA) standards. Local authorities, together with the Ministry for the Environment, are currently working towards standardising sampling and testing methodologies for nutrients, including nitrogen.  A series of National Environmental Monitoring Standards (NEMS) for water quality were released in 2019, and over time councils will implement these new standards into their water quality monitoring regimes.

Which unit is it given in?

Biggs B 2000. New Zealand Periphyton Guidelines: detecting, monitoring and managing enrichment of streams.  Prepared for Ministry for the Environment.