The term ‘nitrate-nitrogen’ refers to the nitrogen portion of the total nitrate in a sample. Nitrate is a common, naturally occurring chemical compound made of the elements nitrogen (N) and oxygen (O). It is an important source of the nitrogen that is essential for plants to grow. Nitrate is derived from the decay of organic material in soil and animal plant waste, and it can also be manufactured as nitrogen fertiliser. 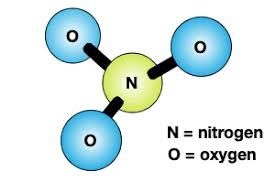 The nitrogen atom is slightly smaller than the oxygen atoms, so nitrogen makes up just under one quarter of the mass of the ion – 22.6% of the mass, to be more precise. Therefore, if a sample of water contains 100 mg of nitrate, it contains 22.6 mg of nitrate nitrogen.

For environmental monitoring, scientists commonly record nitrate concentrations as nitrate-nitrogen so that they can compare the values to nitrogen in other forms that might also be present, such as ammonia nitrogen, organic nitrogen, or nitrogen gas. However, nitrate-nitrogen never occurs on its own. It is always part of the full nitrate ion.

How does nitrate enter groundwater?

Nitrate is highly soluble in water. As it forms in soil from the decay or oxidation of other nitrogen compounds, nitrate dissolves readily into the water in the soil pores. From there, plants can draw the nitrate in through their roots and use it to build proteins and amino acids that they need to grow. However, if there is more nitrate present than the plants can take up, the excess remains in the soil. Then, when it rains, that nitrate is washed, or leached, downward through the soil and into the underlying groundwater.

Therefore, nitrate contamination of groundwater occurs as a result of excess nitrate in the soil. This might be a result of excess application of fertiliser or farm effluent. It can also result from animal urine, human wastewater, or soil cultivation.

Why is nitrate a problem in groundwater?

Groundwater is commonly used as a source of drinking water in New Zealand. At high concentrations, nitrate in drinking water can pose a health risk, particularly to babies fed with formula made from the water. To prevent this risk, the Ministry of Health has set a Maximum Acceptable Value, or MAV, of 50 mg/L for nitrate in drinking water. Note that this value refers to the concentration of the full nitrate ion; using the relationship discussed earlier, it is equivalent to a nitrate-nitrogen concentration of 11.3 mg/L.  It is important to note that boiling water before drinking does not remove nitrate-nitrogen.

Some recent studies have suggested human health risks at much lower concentrations that the MAV.  A study in Denmark (Schullehner and others, 2018) has suggested an increased risk of colorectal cancer when drinking water has nitrate concentrations above 3.87 mg/L (equivalent to 0.87 mg/L as nitrate-nitrogen).  Two studies published in 2021 (Coffman and others, 2021; Sherris and others, 2021) suggest adverse birth outcomes when drinking water contains nitrate concentrations above half the MAV.  The Ministry of Health reviews new information, and there is no change to the MAV.

Why does some groundwater have very low nitrate-nitrogen concentrations?

Nitrate-nitrogen concentrations differ from one place to another for a variety of reasons, but two of the major factors are recharge source and redox conditions.

The term redox refers to reduction and oxidation reactions – chemical reactions that remove or add oxygen to chemical compounds. Some aquifers contain organic material or vegetable matter, particularly swampy areas or that have been swamps in the geologic past. The organic material breaks down or rots over time, consuming all of the available oxygen. We call these conditions ‘reducing’.

As discussed above, the nitrate molecule contains oxygen. When nitrate is exposed to reducing conditions, the oxygen is removed and the nitrate is converted to nitrogen gas. This process is also called ‘denitrification’, and it has been shown to occur on a local scale in many parts of New Zealand. It can explain why some wells have very low nitrate concentrations when other wells nearby have much higher concentrations. However, it is unclear that denitrification plays a major role in removing nitrate from groundwater on a regional scale.

Does nitrate occur naturally in groundwater?

Nitrate is a natural chemical and it does occur naturally in groundwater, but generally at low concentrations. Estimates of natural nitrate-nitrogen concentrations in New Zealand groundwater range from as low as 0.25 mg/L (Morgenstern & Daughney, 2012) to as high as 3.5 mg/L (Daughney & Reeves, 2005). Similar ranges have been reported in the United States (Madison and Brunett, 1985; Nolan and Hitt, 2003).

How are samples tested for nitrate-nitrogen?

Water samples are collected by local authorities and sent to laboratories. Each form of nitrogen requires a different chemical test.  The majority of local authorities use methods that follow the American Public Health Association (APHA) standards. Local authorities, together with the Ministry for the Environment, are currently working towards standardising sampling and testing methodologies for nutrients, including nitrogen.

In what units is nitrate-nitrogen reported?