In New Zealand, groundwater is a valuable supply of fresh water for drinking water, irrigation and industry, and many of our streams and lakes.

New Zealand’s Regional and Unitary Councils regularly monitor groundwater quality in wells across the country. Here, you can explore the data collected from these wells and see how groundwater quality has changed over time. Learn more about what groundwater is and how this vital resource is monitored through our factsheets.

Welcome to the Groundwater Quality topic. Here, we’ve brought together monitoring data from regional councils and unitary authorities across New Zealand, giving you an opportunity to look at groundwater quality at a national scale.

Regional council staff collect groundwater samples from these wells on a regular basis. Most are sampled every three months, providing data to help scientists and decision-makers evaluate the state of groundwater quality and to evaluate trends over time.  Click on the 'Read more +' button for the LAWA Groundwater Quality National Picture Summary 2022.

Groundwater is a vital resource for New Zealand. It is widely used as a source of drinking water, whether by individual households with their own wells, or by communities and cities including Christchurch and Wellington. Groundwater is also used for irrigation and industry.  It feeds many streams and lakes. Understanding the quality of groundwater helps us to manage land uses that affect it and the uses that depend on it.

LAWA shows groundwater quality information from wells located throughout New Zealand. Data and information are available from more than 900 wells.  Regional and unitary councils monitor groundwater for a range of water quality indicators, five of which are displayed on LAWA: chloride, electrical conductivity, dissolved reactive phosphorus, E. coli and nitrate-nitrogen.  State and trend analyses for these indicators have been updated using data up to the end of December 2020.

Data collected by regional councils and unitary authorities shows that while most groundwater is of very good quality, contamination from E. coli and nitrate does occur. All groundwater is potentially vulnerable to pathogen contamination (indicated by E. coli), so people should have their well water tested regularly. Nitrate concentrations exceed drinking-water standards in some wells, and long-term trends are variable, with roughly equal numbers of wells displaying improving and degrading trends. Seawater intrusion is not widespread, but continued monitoring is important so that we know if the situation changes.

This national picture presents an aggregated view of the state of long-term monitored wells and how the groundwater quality has changed over the past ten years.

LAWA evaluates the five groundwater quality indicators against various thresholds, depending on the indicator. The state for any given year is a median value based on available data over the previous five years, except for E. coli where we report on whether E. coli has been detected at all over the previous five years.  For more detail on how state values are calculated for groundwater quality, see this factsheet.

LAWA groups nitrate-nitrogen concentrations based on the Maximum Acceptable Value (MAV) in the Drinking-water Standards for New Zealand (11.3 mg/L) and half the MAV (5.65 mg/L). For more information, refer to the LAWA factsheet or to this page on the Ministry of Health website.

Groundwater from about two thirds of the wells presented on LAWA has a five-year median concentration greater than 1 mg/L. For the most part, this reflects contamination from human activities. Concentrations are higher than half the MAV in around 25% of the wells presented, and they exceed the MAV in about 6% of monitored wells. There has been little change in these proportions over the past ten years.

The higher nitrate concentrations are generally found in areas of intensive agriculture, either grazing (for example Canterbury, Southland and Waikato) or vegetable farming (such as Pukekohe in Auckland and the Horowhenua in Manawatu-Whanganui). A few regions, such as Bay of Plenty, Gisborne and Marlborough, appear to have relatively low concentrations.

Nitrate-nitrogen concentrations have been fairly stable at the national level over the past ten years (Figure 1), though at a regional level, there is a mix of areas with improving and degrading trends. For more detailed information, you can browse LAWA to look at state and trends at individual wells. 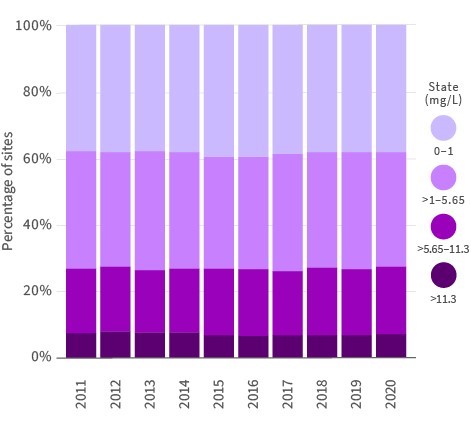 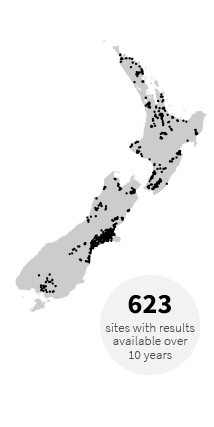 Figure 1. Changes in the state of nitrate-nitrogen concentrations from 2011-2020 in groundwater from the 623 wells where there were enough data to determine a result each year. The location of these monitoring sites is shown on the map.

There are no environmental or health thresholds for DRP concentrations in groundwater, so the results shown on LAWA are based on the distribution of the data. Approximately one third of the sites shown on LAWA fall into each of the three categories shown on the map and in Figure 2.

In contrast, alluvial gravels derived from greywacke contain very little phosphorus. Therefore, groundwater beneath the Canterbury Plains and other alluvial gravel plains, such as in Tasman, Marlborough and West Coast, has relatively low DRP concentrations. 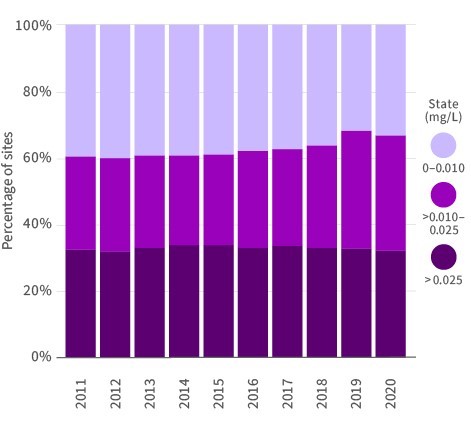 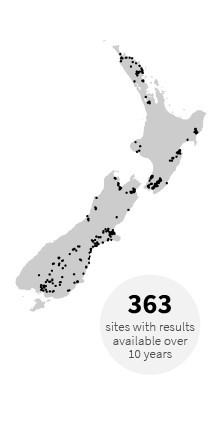 Figure 2. Changes in the state of dissolved reactive phosphorus (DRP) concentrations from 2011-2020 in groundwater from the 363 wells where there were enough data to determine a result each year. The location of these monitoring sites is shown on the map.

LAWA treats E. coli results differently to the results for the other four indicators. When calculating a value for state, LAWA considers whether E. coli was detected in any of the samples collected over the past five years. If so, the state for E. coli is shown as “detected”.

This is because the most important thing about E. coli in a drinking-water sample is not the numerical result, but whether it is detected at all. If E. coli is detected, it indicates the presence of faecal material in the water and the risk that other harmful pathogens may also be present. In a broad sense, that risk increases with higher E. coli counts, but even an E. coli count of 1 in a 100 mL sample indicates a risk, and it exceeds the New Zealand drinking-water standard.

Roughly half the wells presented on LAWA have had at least one E. coli detection in the past five years. This shows that groundwater supplies are widely vulnerable to faecal contamination. The most common sources of this contamination include grazing animals, farm effluent disposal and on-site wastewater systems.

In many cases, wells are contaminated by water at the land surface flowing directly into the well. This risk can be minimised by making sure the well head is secure. The area immediately surrounding a well should be fenced off to prevent stock access and kept clear of any potential contaminants. Well casing should be elevated above ground and above stormwater and flood levels. The top of the well should be securely sealed or capped, and any hoses or cables should also be securely sealed.

Figure 3 shows how E. coli detections have changed over the past ten years. There are 469 sites where we can calculate a state value for every year between 2011 and 2020. In 2011, E. coli had been detected in 45% of those wells over the previous five years. By 2020, that percentage had increased to 55%. The reason for this trend is not clear, but it may reflect increased E. coli contamination of groundwater, possibly related to more intensive animal grazing and growing numbers of onsite wastewater disposal systems.

As a final note, please keep in mind that the wells presented on LAWA are not all necessarily used for drinking-water supply, and the results do not represent drinking water quality in New Zealand. The results represent the source water, the raw water before any treatment, which could potentially be used for water supply. 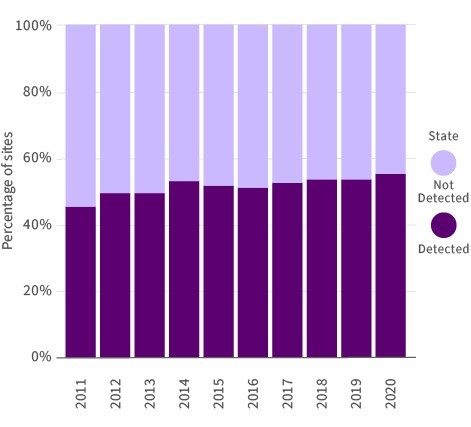 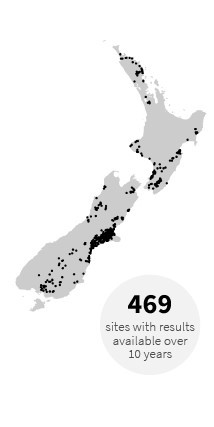 Figure 3. Changes in the state of E. coli detections from 2011-2020 in groundwater from the 469 wells where there were enough data to determine a result each year. The location of these monitoring sites is shown on the map. Note that unlike the other indicators shown on the page, which use median values, the state of E. coli in a given year is determined only by whether E. coli was detected in any sample over the preceding five-year time period.

LAWA compares chloride state to thresholds based on the Guideline Value (GV) of 250 mg/L set by the Ministry of Health in the Drinking Water Standards for New Zealand (DWSNZ, 2005, revised 2018). Chloride concentrations greater than the GV can affect the taste of water.

For the vast majority of wells, chloride concentrations in groundwater are far below the taste threshold, and this doesn’t change much over time (Figure 4). 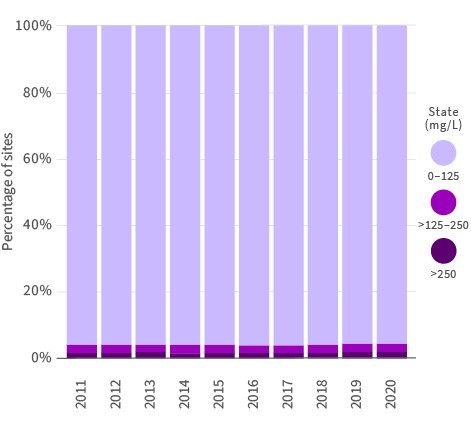 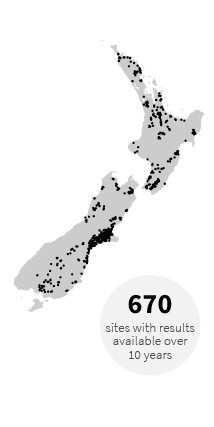 Figure 4. Changes in the state of chloride concentrations from 2011-2020 in groundwater from the 670 wells where there were enough data to determine a result each year. The location of these monitoring sites is shown on the map. 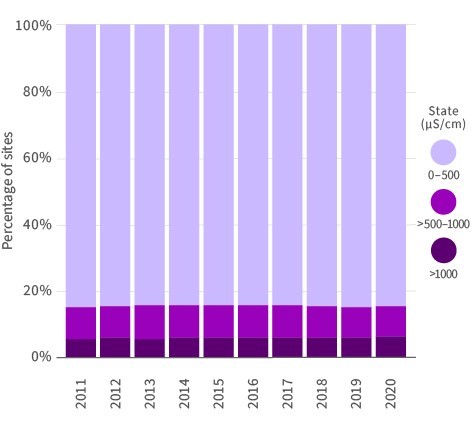 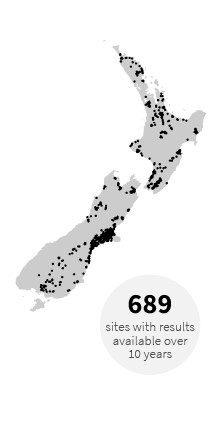 Figure 5. Changes in the state of electrical conductivity from 2011-2020 in groundwater from the 689 wells where there were enough data to determine a result each year. The location of these monitoring sites is shown on the map.

This National Picture Summary provides an aggregated overview of the state of groundwater quality across five indicators using data from regional councils and unitary authorities. Council groundwater quality monitoring programmes are designed to capture environmental state and trend on a regional scale.

Looking at data from individual wells provides further information about state and trend and additional details such as well construction. Information about monitored wells can be accessed either by clicking on a site dot on the map to the left of the LAWA main screen (desktop and tablet users), or by navigating via the region buttons above, then the groundwater zone, and well site of interest. The agency responsible for monitoring an individual site may be able to provide further contextual information on the results shown here.