Groundwater is water found beneath the ground surface. If you dig a hole in the ground, you’ll reach a point where water starts to seep into the bottom of the hole. That’s groundwater. If you pump the water out of the hole, more water seeps in to replace it. You’ve dug a well. Where does the water come from? How did it get there?

When it rains, some of the rain water soaks into the soil and percolates downward into the ground. It fills cracks in rocks and pore spaces between grains of sand and gravel until the ground is saturated, creating an underground body of water that we call an aquifer (Figure 1). There are vast quantities of water in aquifers beneath the ground surface, slowly flowing and seeping through all those cracks and pore spaces. When we dig or drill a well, we can intercept some of that water and pump it out of the ground to use for drinking water supply or irrigation. 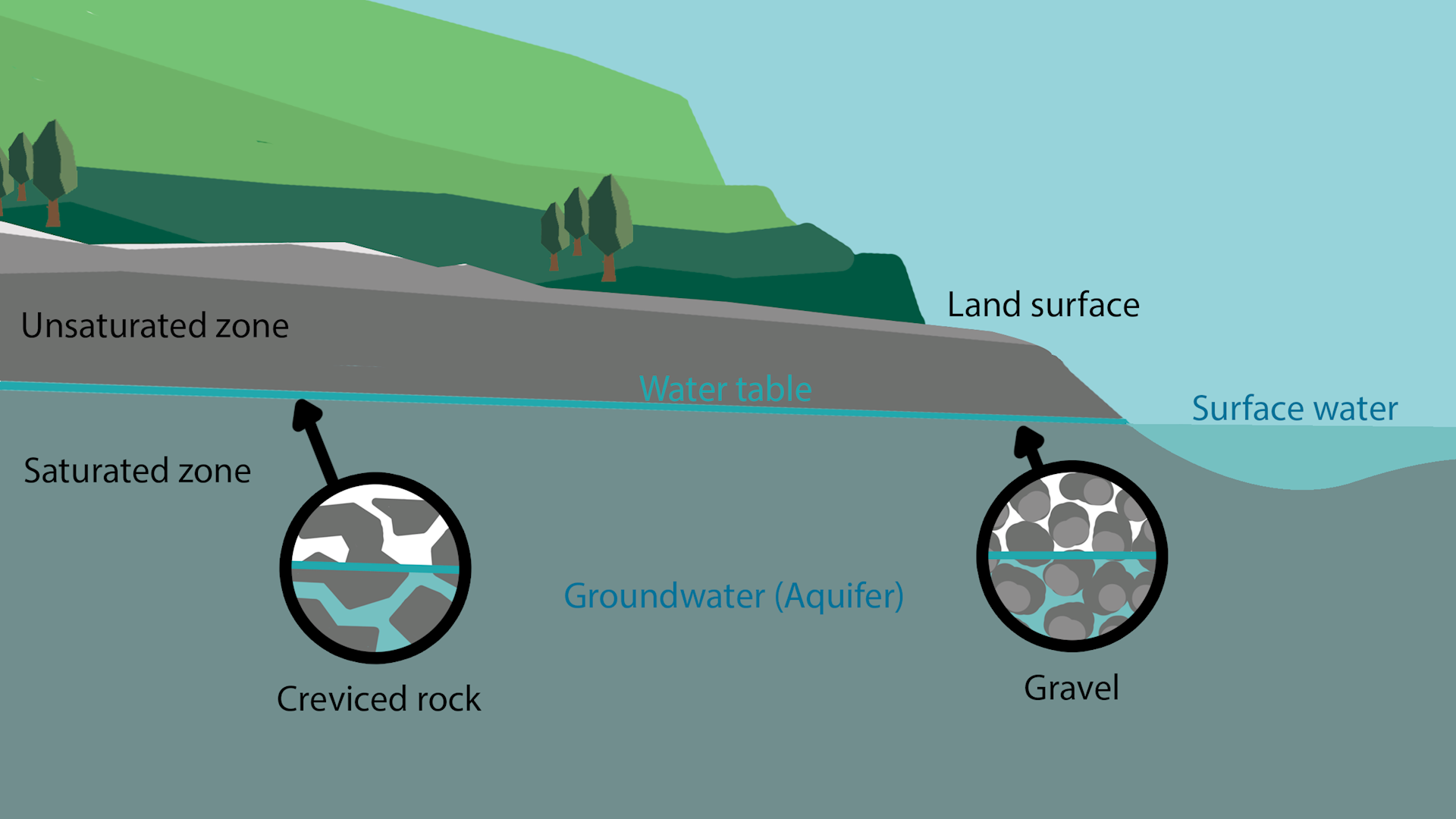 To extract groundwater from an aquifer, we construct a well, which is essentially a hole in the ground that is deep enough to penetrate the saturated zone. Most modern wells are constructed by drilling a hole and lining it with a steel casing to prevent the hole from collapsing. Near the bottom of the well, a screen is attached to the casing to allow water to flow into the well while keeping the rock and sediment out. More information on how wells are constructed can be found in this factsheet. 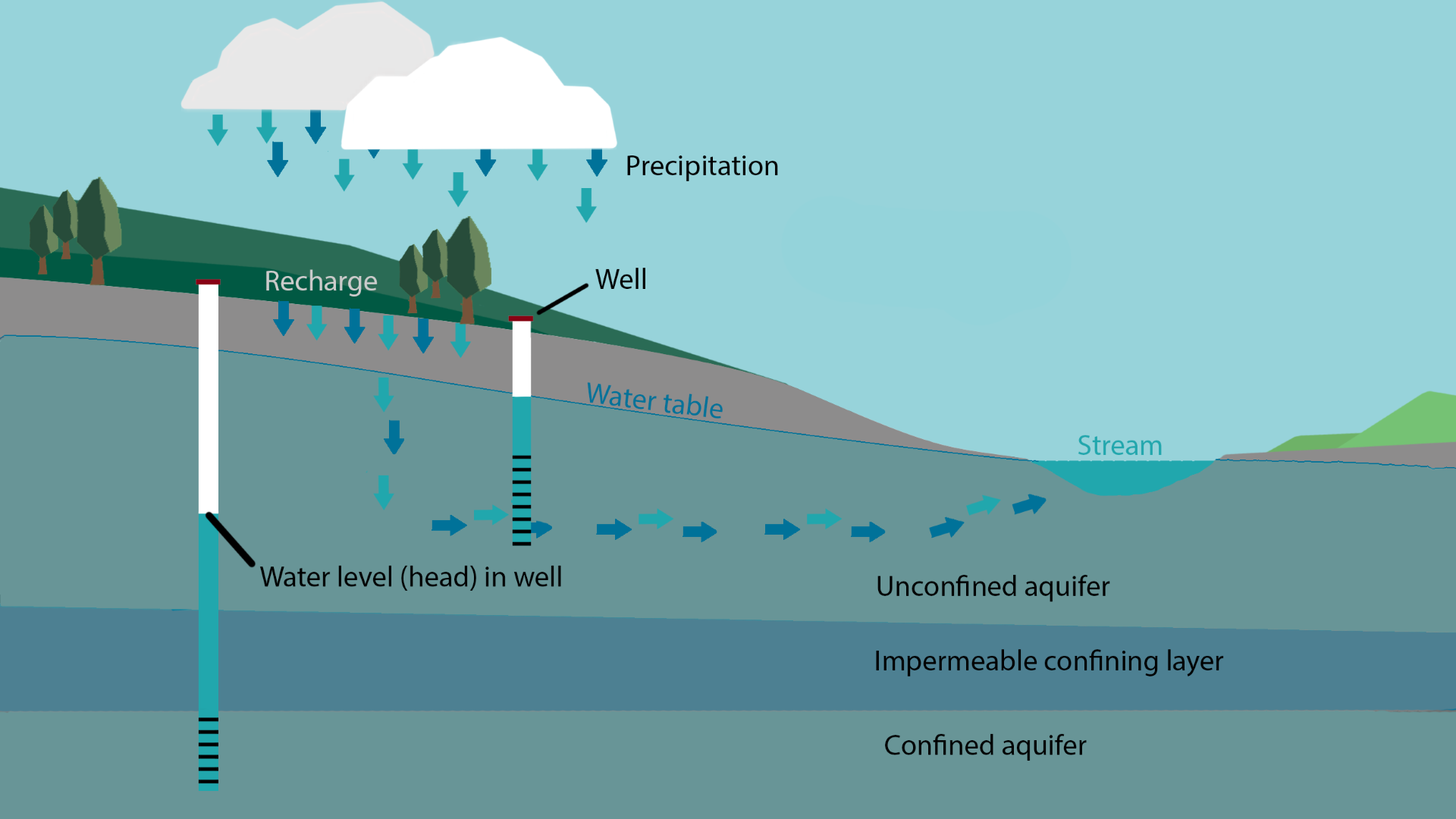 The water in an aquifer does not stay still. It flows through the aquifer from the recharge area (the area where water seeps into the aquifer) to the discharge area (an area where groundwater emerges back onto the ground surface as springs or seeps in lakes and rivers). In Figure 2, for example, the recharge area is the wooded area on the left. Rain water percolates into the ground through the forest floor down to the saturated zone (the aquifer). Once there, it flows toward the right and emerges again to feed the surface water on the right side of the picture.

For the most part, groundwater flows much more slowly than rivers and streams, commonly less than a metre per day. In some parts of New Zealand, however, flow rates of tens or even hundreds of metres per day have been measured.

How is groundwater connected to surface water?

Groundwater and surface water (streams, rivers and lakes) are both part of the water cycle, and they are closely linked. They interact in three basic ways, as shown in Figure 4: 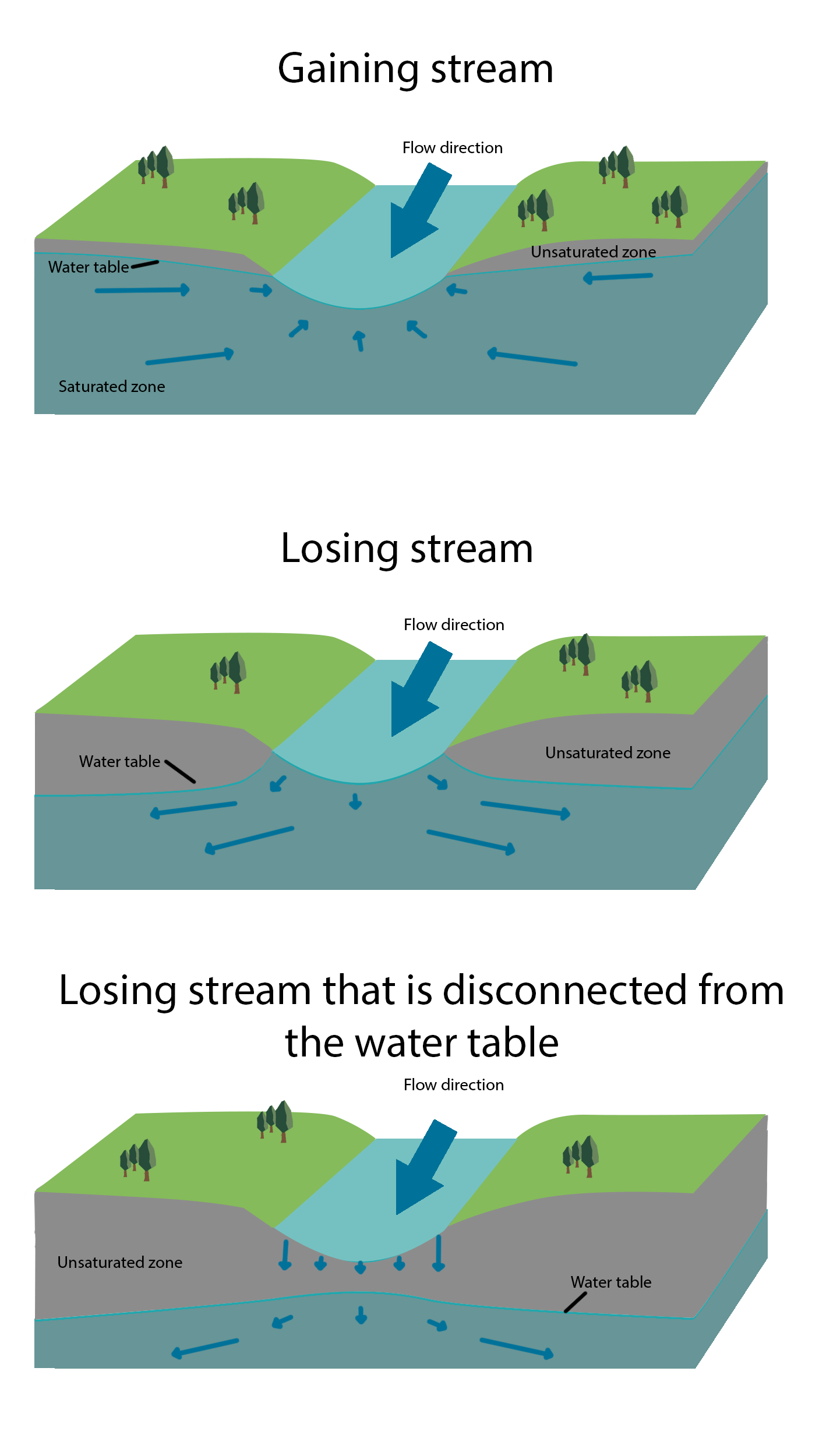 Groundwater quality is also affected by human activities. In agricultural areas, water percolating through the soil can dissolve or leach fertilisers (particularly nitrate) and pesticides and carry them downward into the underlying aquifer. Grazing animals, wastewater discharges and on-site wastewater systems (septic systems) provide pathogenic micro-organisms (bacteria and viruses) that can also be carried through the soil into the groundwater. Improper waste disposal or leaking pipes and storage tanks can also cause groundwater contamination in urban and industrial areas.

A concept that is important for nitrate contamination, as well as contamination by heavy metals, is referred to as “redox”, or reduction–oxidation reactions. Some aquifers contain organic material or vegetable matter, particularly swampy areas or areas that have been swamps in the geologic past. The organic material breaks down or rots over time, consuming all the available oxygen. We call these conditions “reducing”.

In many alluvial aquifers in New Zealand, such as the Canterbury Plains, the aquifer sediments contain little or no organic material, and the groundwater remains well oxidised even to great depths below the ground surface. In such areas, nitrate can persist for many decades and travel long distances.