The water cycle describes the movement of water on, in, and above the Earth. The Earth's water is always moving and changing states, from liquid to gas, to ice and back again. 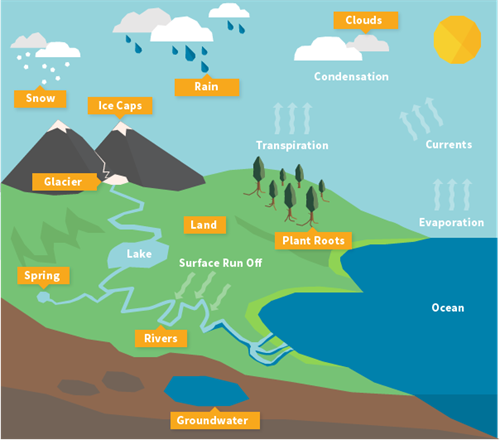 Most of the earth’s water is found in our oceans. The sun heats the water in the ocean causing some of it to turn to gas (water vapour). This is called evaporation.

The gas rises up into the atmosphere on air currents. The higher the gas travels the cooler the atmosphere becomes, eventually reaching a height where the gas condenses into water droplets that we see as clouds. The height at which clouds form is called the condensation level.

Air currents move moisture around the earth to where clouds can grow until the droplets are too heavy and fall as rain. Some water freezes and falls as snow. That snowfall could quickly melt and run into rivers, or stay frozen for many years in glaciers. Otherwise, the water falls as rain and ends up back in the oceans or on land, where it can flow over the ground and into rivers and streams. This is referred to as surface run-off.

However, not all water flows rapidly into rivers. Some soaks through the ground and into aquifers. An aquifer is a layer of rock, gravel, sand or silt under the ground and can store water for long periods of time. This water is referred to as groundwater. Groundwater can seep back into rivers, lakes and oceans, or find its way to the surface through freshwater springs. Groundwater can also be absorbed by plant roots. Plants release moisture into the atmosphere as another step in the water cycle that is called transpiration.