Lakes are localised bodies of water that are surrounded by land. They may be fed by, or feed into rivers or may be maintained by rainfall and groundwater inputs. Lakes exist in all shapes and sizes and may be natural (for example formed by glaciation or landslides) or man-made (for example reservoirs created after a river is dammed).

Lakes are an important feature of New Zealand’s landscape. They provide a habitat for birds and fish, are highly valued culturally by Māori, and are used for a variety of recreational activities including rowing, fishing, swimming and boating. Lakes provide a key source of municipal water supply for many towns and cities throughout the country and they act as natural nutrient sinks for run-off from the land. New Zealand’s deepest lake is Lake Hauroko (462 m), and the largest is Lake Taupo (606 km2).

Lakes can be classified by how they are formed (geomorphic lake types) and by the mixing pattern of the water and how they are connected to the sea.

Lakes can from through various geomorphological processes or any process that creates depressions and rims in the landscape that catches and retains water. The origin of lakes in New Zealand is commonly classified based on Lowe and Green (1992): Aeolian lakes (or dune lakes) are often formed by wind-blown sand deposits and sand dunes. Peat lakes are created as a result of the accumulation of peat, although some lakes that are created by other processes have been modified by peat growth and can be considered peat lakes. Glacial lakes can be formed by combination of different processes, including ice-excavated rock depressions, glacial moraine, and depressions created by melting ice blocks in retreating glaciers. Landslide lakes are often created in valleys that are blocked by rock falls or avalanches and are commonly found in seismically active areas. Riverine lakes commonly form in water filled depressions on river floodplains as river channels migrate and avulse. Shoreline lakes (or barrier-bar lakes) are formed by long-shore drift of a barrier bar or spit across a coastal embayment near the sea and their water is commonly brackish. Volcanic, tectonic, and geothermal lakes are formed by various volcanic activities where some of the geological processes can act together. The latter lake type is often differentiated for other volcanic lakes due to direct active geothermal influence in the immediate catchment or within the lake. Dams (or artificial lakes, reservoirs) are contracted water bodies created by a barrage across a river valley. Their purposes differ and including hydropower generation and water storage for irrigation.

Lakes can be classified based on their thermal mixing regime and connectivity regime to the marine environment. In polymictic lakes, the water column undergoes frequent periods of stratification and mixing during a single year. Most small, shallow lakes in New Zealand are polymictic. In stratified (or monomictic) lakes, mixing occurs only once a year. The water in these lakes usually stratifies into layers in summer and begins mixing in autumn. Most large, deep lakes in New Zealand are monomictic. Brackish lakes are coastal lakes that either consistently or temporarily exceeds a (marine derived) salinity of 0.5 psu and which has its permanent or temporary connection to the sea some distance downstream from the lake. A coastal lagoon or tidal lagoon with an intermittently closed and open direct connection to the sea are defined as ‘Intermittently Closing and Opening Lakes and Lagoons’ (or ICOLLs),a and in their natural state fill with freshwater until they breach a coastal barrier that results in rapid loss of freshwater from the lagoon.

Shallow lakes are less than 10 metres deep. They are generally well mixed throughout the year and can be very productive environments.

Deep lakes (deeper than 10 metres) are often stratified in summer, meaning environmental conditions such as temperature and dissolved oxygen level change over the depth of the water column. When a lake is stratified, it usually forms three distinct layers: the epilimnion, the thermocline and the hypolimnion.

During the summer, warm water, which is less dense will sit on top (epilimnion) of colder, denser, deeper water (hypolimnion). The thermocline (or metalimnion) separates the top and the bottom layer and is a thin but distinct layer where temperature changes more rapidly with depth than it does in the layers above or below.

As summer proceeds, there can be less and less dissolved oxygen in the hypolimnion in stratified lakes. This is because the water below the thermocline depth does not circulate to the surface where re-aeration occurs and organisms and the decay of organic matter in the bottom waters deplete the available oxygen. In some instances lakes can become anoxic in their bottom waters as a result of these processes. As winter approaches, the temperature of the surface water will drop. A point is reached where the density of the cooling surface water becomes greater than the density of the deep water, then the different layers will start to mix (overturn) as the dense surface water moves down under the influence of gravity. This process is often aided by wind, inflow floods and/or other processes (e.g. currents) that agitate the water. 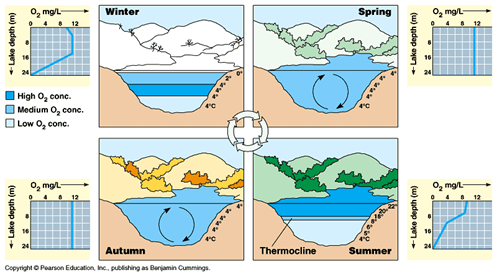 Lake stratification over the course of a year showing changes in dissolved oxygen and temperature with depth (https://lakeecosystems2014.wordpress.com/lake-data/physical-characteristics/).

Nutrients such as nitrogen and phosphorus tend to be limiting resources in standing water bodies, so increased concentrations tend to result in increased plant growth. The ‘trophic state’ of a lake may sometimes be used to make a rough estimate of its biological condition or water quality. There are three main classes of trophic state: oligotrophic, mesotrophic or eutrophic. Oligotrophic lakes are typically low in nutrients and are unproductive, mesotrophic lakes have moderate levels of nutrients and productivity, while eutrophic lakes exhibit excessive nutrient levels and high biological productivity. The Trophic Level Index (TLI) is used on LAWA to give an overall picture of the health of New Zealand lakes. See our factsheet on how TLI is calculated.