How is land cover in New Zealand monitored?

The most widely-used source of land cover monitoring data in New Zealand is the New Zealand Land Cover Database (LCDB).

The LCDB programme has a reliable and consistent technical framework, and also provides valuable historical data.  The latest version of LCDB (version 4.1) provides a series of ‘snapshots’ of land cover in the form of maps derived from satellite imagery across the country, covering the dates: 1996, 2001, 2008 and 2012.  At each snapshot, the satellite images are analysed and land cover types are assigned to detailed classes, such as ‘urban area’, ‘depleted grassland’, and ‘gorse and broom’ (see the factsheet ‘Land cover and why it is important’ for the definition of the detailed classes).  Continued monitoring of land cover in New Zealand is dependent on the LCDB being updated at regular intervals (about 5-yearly) on an on-going basis.

What is the Land Cover Database (LCDB)?

The LCDB is described as a “multi-temporal, thematic classification of New Zealand’s land cover”.  It provides nationally consistent maps of land cover based on the analysis of satellite imagery.  The maps show distribution of 33 ‘detailed’ land cover across the country at four ‘snapshots’ in time: 1996, 2001, 2008, and 2012.  Each snapshot was developed at the time as a new version of the LCDB (i.e. version 1, 2, 3, and 4) and although the classification has evolved with successive versions, the developers have maintained ‘backward compatibility’ (i.e. the ability to compare different versions).  Backward compatibility is very important because it is needed to be able to look at change in land cover over time.  The LCDB is considered to be suitable for supporting national and regional environmental monitoring and other uses such as biodiversity assessments and forest inventory.  The latest version of the LCDB (version 4.1), created by Landcare Research with the support of the Ministry for the Environment and other government agencies, was released in July 2015 and included corrections made to all previous snapshots.  LCDB is published under a Creative Commons Attribution 3.0 New Zealand Licence (CC BY 3.0 NZ).  Figure 1 provides an example of the use of LCDB for the preparation of a land cover map (showing medium-level classes in the southern part of the South Island as at 1996) for the reporting of land cover in LAWA. 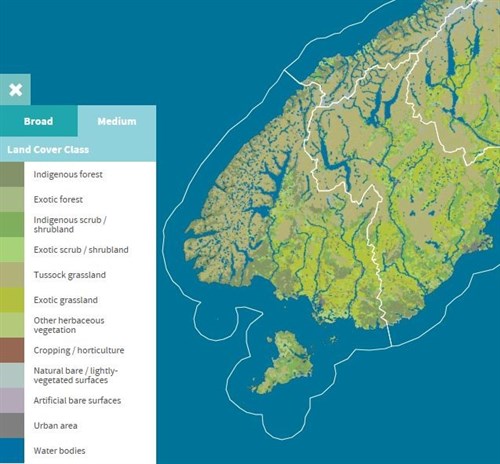 Figure 1.  An example of a land cover map derived from the LCBD version 4.1.  The map shows the distribution of medium-level land cover classes in the southern part of the South Island as at 1996.

What are the limitations of the LCDB data?

As the LCDB data is derived from satellite imagery covering the entire country, there are likely to be some minor accuracy issues in certain areas.  For example, a complex mixture of plant species may confuse the classification process at times, particularly in undulating terrain.  Overall, it is considered a reliable and robust national dataset if viewed at appropriate scales.  It is not intended to be used to show land cover at a property scale.

Details of the New Zealand Land Cover Database, including the spatial data it provides, associated metadata, and reports can be found on the LRIS portal here