Factsheet: Land cover and why it is important

What is land cover?

Land cover describes the types of vegetation, and built or natural features that cover the land’s surface.  Land cover can be natural in origin (e.g. a remote indigenous forest or a lake), artificial – occurring as a direct result of human activities (e.g. a built-up area or roads), or somewhere in between (e.g. exotic grassland or exotic forest).

It is important to note that ‘land cover’ is not the same as ‘land use’, although the two things are related and the terms are sometimes used interchangeably.  Land use describes the different ways that people use the land (e.g. dairy farming or drystock farming, etc.).  Land cover can be influenced by land use.  For example, a forestry use will likely have an exotic forest cover and a pastoral use will have an exotic grassland cover.  However, the same land cover may have multiple different land uses (e.g. the different types of pastoral land uses with an exotic grassland cover).

Why is land cover important?

Vegetative and other surface covers are often a key defining feature of our landscapes – that is, we often think of our landscapes in terms of their land cover.  Therefore, describing the land cover across New Zealand, its regions, and catchments in a consistent and systematic way can help us characterise the landscapes we live in using a common framework and ‘language’.

Understanding changes in land cover is important because the type and location of vegetation cover can influence land stability and the movement of water through the landscape.  For example, woody vegetation cover (mainly forest and scrub/shrubland covers) provides extensive root systems which help to hold the soils on hillslopes in place.  Also, where woody vegetation provides a closed canopy, the impact of heavy rainfall on hillslopes is lessened because the foliage and branches intercept the rainfall, preventing a lot of it from directly landing on the soil surface.  This interception of rainfall has the effect of reducing surface water run-off from hillslopes which, in turn, helps prevent soil erosion and the loss of sediment and associated nutrients like phosphorus to waterways.

Ecological (biodiversity) and economic (land use) functions also have complex relationships with land cover.  Some types of land cover (e.g. indigenous covers; tussock grassland, etc.), and their location and connectedness with landscapes are important in terms of the maintenance and enhancement of indigenous biodiversity, either in terms of their intrinsic values or as important habitats for other rare or endangered species.  Also, land cover is sometimes used as a very broad-brush proxy for land use, given that land use can influence land cover.  However, is not the intention of the land cover topic in LAWA to provide a proxy for land use, and the classes used have not been defined with that purpose in mind.

What are the land cover types and what do they include?

There are many possible ways of arranging the wide variety of individual land cover types that can be observed (using remote sensing techniques) into meaningful classes for the purpose of environmental reporting.  Various land cover classifications may define similar-sounding class names differently and so it is important to clearly define the land cover classes used in the LAWA land cover topic in terms of the specific vegetation and surface cover features they contain. 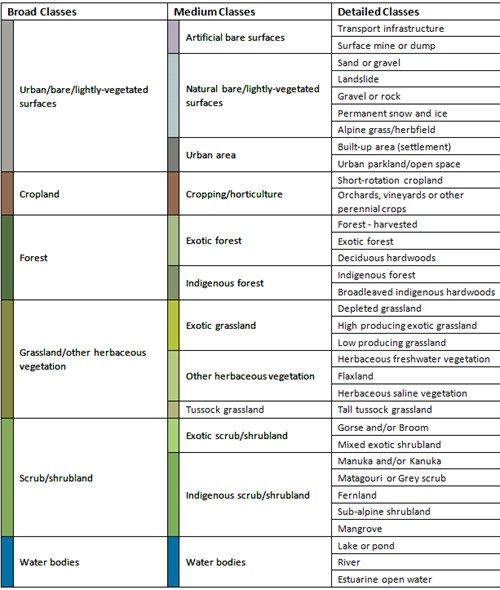 Table 1 shows, for example, that the forest class at the broad level encompasses exotic forest and indigenous forest classes at the medium level.  The exotic forest class comprises three detailed land cover classes: forest – harvested, exotic forest, and deciduous hardwoods.  It is assumed that areas of harvested forest will be replanted in exotic forest.  The exotic grassland class at the medium level encompasses three detailed classes: depleted grassland, high producing exotic grassland, and low producing grassland.  The depleted grassland class, representing former areas of short tussock grassland in the drier parts of the eastern high country of the South Island, was included in the definition of the exotic grassland class because of the predominance of exotic weed species (e.g. Hieracium) and its degraded condition due to over-grazing and other management-related pressures.

The detailed classes are defined in full by Thompson et al. (2003) and summary descriptions of the classes are reproduced in Table 2.

Details of the New Zealand Land Cover Database, including the spatial data it provides, associated metadata, and reports can be found on the LRIS portal here.

See the factsheet on how land cover is monitored in New Zealand here.