We measure the current state of our rivers, streams and lakes to get an idea about whether our water is suitable for use for various purposes, and about the effect of different pressures (e.g. urbanisation, farming, etc.) on the condition of our freshwater resources.

Some influence from people on our waterways is an inevitable outcome of supporting our communities and agriculture, and it may not be possible to return most water bodies in New Zealand to their pre-human state. Even where human pressures could be almost completely removed, such as within national parks, introduced aquatic species such as trout, as well as native and exotic birds, insects and pest mammals, and natural processes such as erosion and atmospheric pollution, impact our waterways to some extent.

How is State calculated for our rivers and streams?

State in the LAWA River Quality topic is described using two independent methods: state quartiles and attribute band scores.  The state quartiles are a relative measure, comparing sites against each other, while the attribute band scores are an absolute measure, evaluating each site against expectations of water quality values in the National Policy Statement for Freshwater Management 2020 (NPS-FM 2020).

The state quartile value presented for the river water quality sites on LAWA is based on the median of monitoring results from the last five hydrological years (July 2016 - June 2021).   The data used to calculate state quartiles for rivers is collected monthly, bimonthly or quarterly.  A median value is calculated when there is at least 50% of monthly data, or 80% of bimonthly or quarterly data, available over this time-period, (i.e. at least 30 of 60 monthly samples, 24 of 30 bimonthly samples, or 16 of 20 quarterly samples, over a five-year period), and the quartile ranking is derived by comparison of each site’s median with other sites'. The quartile ranking describes how each site ranks relative to the others – the 1st quartile being the best quarter, the 4th quartile being the worst quarter.

For river water quality indicators, quartiles can be derived for a site by comparing its median values with those of all other sites around the country, or by comparing only to sites with similar land use and/or altitude. Thus, a single site may have various quartile scores, depending on the group it’s being compared against.

The NPS-FM 2020 requires the management of freshwater in a way that ‘gives effect’ to Te Mana o te Wai, and sets up requirements for regional councils and unitary authorities in setting objectives, policies and rules to manage freshwater in their regions.  The characteristics of the water that need to be managed are referred to as ‘attributes’ in the NPS-FM 2020, and as "indicators" in LAWA.  LAWA evaluates state (current conditions) from river sites nationwide against attribute bands described in the NPS-FM 2020, from A (good) to D or E (poor).

Councils, along with their communities, need to set ‘target attribute states’ (also known as desired attribute states) for sites in their region.  For many attributes there is a national bottom line value, and councils and their communities need to aim above that bottom line, unless there is a specific justification why that would not be achievable (e.g. the existing freshwater quality is caused by naturally occurring processes, or a specific time-limited exemption applies).  As part of setting target attribute states, councils will also set timeframes as to when these will be achieved.

The 'current state' for 2021 at each site is based on monthly data from the previous five hydrological years (July 2016 - June 2021).  This evaluation requires minimum data abundance to be met before a grade can be assigned, so not all sites that feature on LAWA can be assigned an attribute band.

At some sites clarity is not measured and, where available, turbidity measurements have been converted to clarity data to determine the attribute band for clarity (suspended fine sediment).

For sites where there are no nitrate nitrogen data available, total oxidised nitrogen data have been used to calculate the attribute band for nitrate (toxicity).

Several indicators (attributes) have multiple band definitions in the NPS-FM 2020, referring to different statistics calculated from the set of monthly data, such as the median or maximum.  The overall attribute band for such indicators is the worst of those based on the different statistics of the attribute data.  For example, if the ammoniacal nitrogen median result met the A band and the maximum result met the B band, the site is assigned an attribute band of B for ammonia toxicity, and this is displayed on LAWA.

An example of the descriptions for attribute bands (ammonia toxicity) is given below: 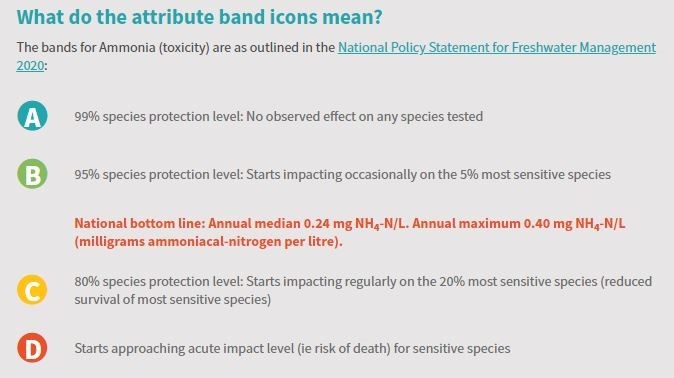 The difference between State Quartiles and Attribute Band Scores

State quartiles are a useful comparative ranking.  They show us how a site compares against other monitored sites, whereas the attribute band provides an absolute ‘score’ for some water quality indicators.

For some sites the water quality may be good (and score “A” under the NPS-FM 2020), yet still be in the 4th quartile relative to other sites. This happens when all the sites are good (and meet the attribute band “A” definition); some will still be better, leaving others in the 4th quartile. On LAWA that looks like this: 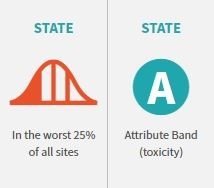 These indicators are generally measured once per year and the state presented for these sites uses the median calculated from data over the last five hydrological years (July 2016 - June 2021).  LAWA requires a minimum of four data points from the last five years for a median value to be calculated.  Attribute bands shown for MCI, QMCI and ASPM were determined using the numeric attribute states in the NPS-FM 2020.