What are potentially toxic algae?

In aquatic environments, cyanobacteria can multiply and form blooms suspended in the water (known as planktonic) or dense mats attached to rocks on river beds (known as benthic).  Planktonic blooms are generally found in slow moving water-ways such as lakes, while benthic blooms usually occur in rivers. 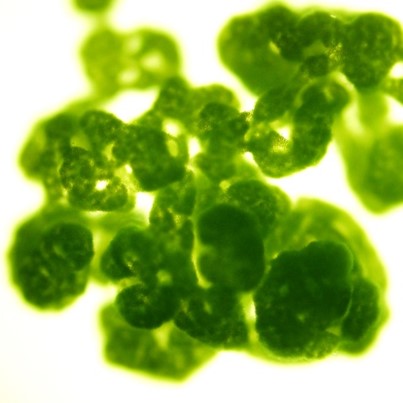 Why can potentially toxic algae be a problem?

Potentially toxic algae can become a problem when they increase to high concentrations, forming ‘blooms’.  Most of the year potentially toxic algae are present at low levels that are not much of a danger.  Blooms are more common during the summer months, when low rainfall, warm temperatures, the right level of nutrients and more sunlight create an environment where it can thrive.

Other than the general effects of algal blooms on waterways (e.g. reduction in dissolved oxygen and light in the water column), an increasing number of cyanobacterial species are known to produce toxins. These natural toxins, known as cyanotoxins, can be a threat to humans and animals when eaten, even licked, or when water containing the toxins is swallowed. The conditions for when they can become toxic is not well understood, and the levels of toxicity can only be determined by laboratory testing.  This is why it is safest to treat the blooms as if they are toxic at all times.

What does potentially toxic algae look like in rivers?

In rivers (and occasionally lakes), potentially toxic algae generally form brown or black mats that grow on rocks in the river bed (also called benthic). Mats that come loose from the riverbed can wash up on the banks or form floating ‘rafts’ in shallow areas. When exposed, the mats may dry out and turn a light brown or white colour and may also produce a strong musty odour. 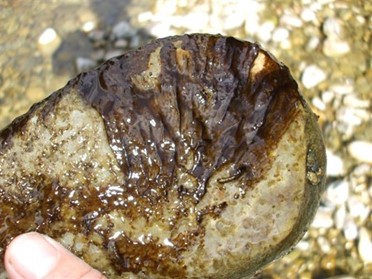 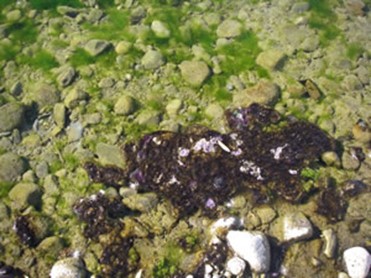 What does potentially toxic algae look like in lakes?

In lakes and slow-flowing waters, potentially toxic algae grow in a free-floating (also called planktonic) form which can cause the water to become murky or cloudy. Planktonic cyanobacterial blooms are generally green in colour and can give lakes a ‘pea soup’ appearance. They can also form visible green to red films or scums on the water’s surface, especially at the water’s edge. 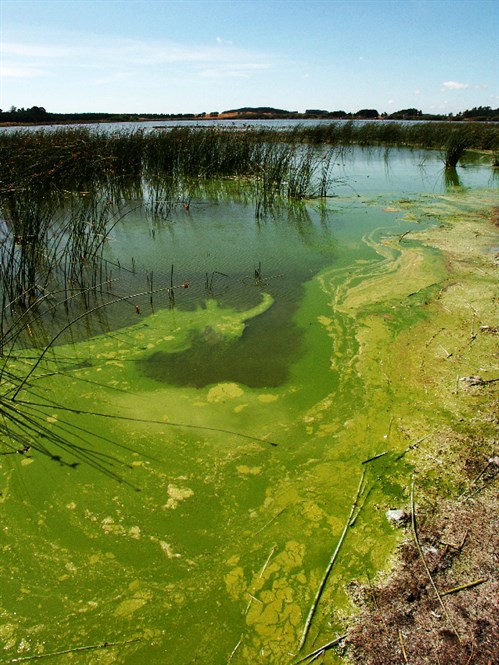 What is the impact on people?

Exposure to high levels of toxins from cyanobacteria may result in serious illness or death in humans. The effect of cyanotoxins varies from rapid onset of nausea and diarrhoea, to, in extreme cases, more serious effects such as liver damage.  These toxins have no known antidotes.

Exposure can occur by spending time in or around water where there is a bloom, as your skin is likely to come in contact with the water, or you could ingest the water when doing things like water-skiing or swimming. Some people will have an allergic reaction to just touching the potentially toxic algae.

Children are at higher risk than adults for illness from toxic algae because they weigh less and can get a relatively larger dose of toxin.  Toddlers are particularly at risk as they like to put things into their mouths.  Even a small amount the size of a 50 cent piece can be enough to cause serious harm if eaten.

What should I do if I’ve been exposed and I’m feeling unwell?

Anyone who suspects they are experiencing a reaction due to contact with toxic algae should seek urgent medical attention and advise the doctor of the potential exposure to toxic algae and ask them to notify Regional Public Health.

What is the impact on pets and animals?

Dogs are at the most risk as they like to play and scavenge in the water.  Dog deaths associated with potentially toxic algae living on the bottom of rivers have become increasingly common around New Zealand. In most instances these deaths have been associated with dogs eating a mat forming cyanobacteria (known as Phormidium). Phormidium mats produce a deep earthly odour that dogs seem to be attracted to. The risk to dogs is greatest when Phormidium mats become detached from the river bed and collect at the river edge where they are easily accessible.

If you suspect that your dog has eaten toxic algae, you should treat it like an emergency and contact your vet immediately. In extreme cases, death can occur within 30 minutes after the first signs of illness appear. Signs a dog has been poisoned by toxic algae include lethargy, muscle tremors, fast breathing, twitching, paralysis and convulsions.

Stock can wander into waterways with toxic algae and drink it, so you will need to arrange an alternative water source for them and keep them out of waterways.

How to keep you and your pets safe

The best thing you can do is stay informed.  Look for the latest toxic algae monitoring results, check for any warnings or alerts before you head to the river of lake.  In some conditions potentially toxic algae can rapidly bloom, so learn what to look for, particularly during hot periods of the year.

If potentially toxic algae are present, or you think you have spotted it, then keep out of the water and avoid drinking or touching it.  If you do swim in water that is contaminated with toxic algae, rinse off with fresh water as soon as possible.  Wearing a wetsuit will not protect you.

Keep your dog on a lead, out of the water and most importantly, ensure your dog does not touch, lick or eat any algae mats in the water or at the water’s edge, or drink water from the affected areas.  If your dog has been in the water, do not let them lick their fur, and give them a wash with fresh water.

Is it safe to drink water containing toxic algae?

No. Toxins are not removed by boiling, normal filter systems, steri-pen or UV light or by adding household disinfectant. Arrange alternative drinking water.

Is it safe to boat or canoe in water with toxic algae?

My river has long stringy green algae present, is this dangerous?

No, this algae is typically a non-toxic green algae which is present in rivers when conditions get warm and sunlight hours longer, similar to your grass growing faster during summer.

How is the risk from potentially toxic algae assessed at swimming spots?

The risk from potentially toxic algae present at rivers and lakes is assessed by measuring either the percentage cover of the mat-forming cyanobacteria on rocks, or the numbers of cells of cyanobacteria suspended in the water.  These are compared to national guidelines for New Zealand recreational areas to determine the risk.

How is potentially toxic algae measured?

Blooms are much more common in summer than in winter months. Therefore, this is when routine council monitoring usually occurs.

Benthic toxic algae attached to the riverbed are visually assessed with an underwater viewer called a bathyscope.  A transect is run across the river and the percentage cover is recorded (see pictures below). This is done 4 times within a river area, and an average percent cover of potentially toxic algae cover is recorded.

In addition, the river edge is scanned for detached or exposed mats, and scums and foams that may have collected at the river margins. Recreational users and animals have an increased risk of coming in contact with detached mats. 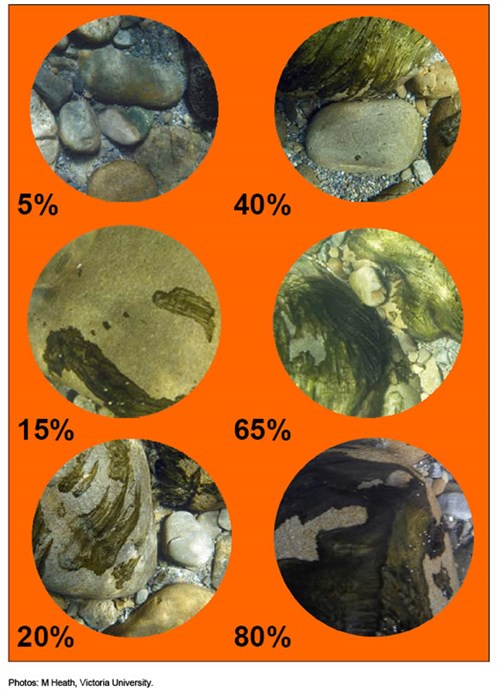 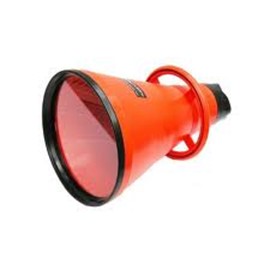 Examples of how to determine percentage cover of benthic cyanobacteria and what an underwater viewer looks like.

Planktonic cyanobacteria are assessed by collecting a sample of water from the surface and counting the number of cells present, or the biovolume of the individuals cells (the amount of space within a cell).  Because different planktonic cyanobacteria may contain different amounts of toxins based on their cell size, biovolume provides a better estimate of potential risk than simple cell counts.

Where to get further information