While pH numbers are unit-less, the word pH stands for “pondus Hydrogenium” which literally means the weight of hydrogen.

Most natural waters fall within the slightly alkaline range between pH 6.5 to 8.0 and in the absence of contaminants most waters maintain a pH value that varies only a few tenths of a pH unit. Some streams are naturally acidic like the brown water streams of the South Island’s West Coast which contain humic acids from vegetation and wetlands. There are also  a number of streams and rivers on the volcanic plateau, such as the Whangaehu River with its headwaters on Mt Ruapehu.

pH changes during the day just like dissolved oxygen. During periods of active plant photosynthesis, dissolved carbon dioxide is taken up by plants and converted to organic matter producing oxygen and consuming acid (H+). This causes the pH and dissolved oxygen to rise. The reverse happens at night when plants respire the oxygen produced during the day (see the figure below). 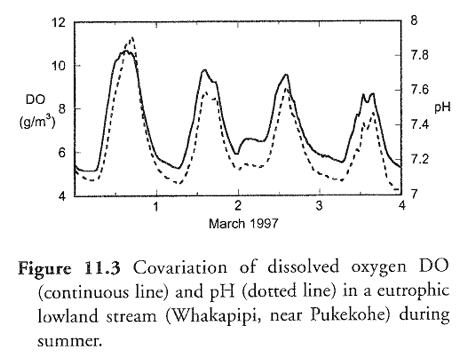 Why can extreme pH values be a problem?

The main pollutants responsible for the acidification of freshwaters are sulfur dioxide (SO2) and nitrogen oxides (NOx). Nitrogen and sulfuric emissions can come from either natural sources such as volcano emissions, lightning, and bacterial processes or from man-made sources such as power stations and industrial plants, like the mining and smelting of high-sulfur ores and the combustion of fossil fuels.

Much of the damage to aquatic life in sensitive areas is a result of acid shock. This is caused by the sudden run-off of large amounts of highly acidic water and aluminium ions into lakes and streams, when snow melts in the spring or after unusually heavy rains. Extreme pH can kill fish and invertebrates. For example, low pH levels can affect the protective slimey coat of fish, and waterways with pH levels below 4.5 are generally unliveable for fish. When the pH of freshwater becomes highly alkaline (greater than 9), fish might become unable to dispose of metabolic wastes and their outer surfaces like gills, eyes and skin get damaged.

How to test for pH?

Most councils measure pH directly in the field with a pH meter.

Which unit is pH given in?