The New Zealand River Awards is an initiative of the Morgan Foundation and began in 2013. The Awards event is held each year in Wellington at the end of November.

Three types of Awards are given out at the event:

Click on the links below to view information on each award type and winners from 2015 to 2013:

The New Zealand River Story Awards recognise and celebrate the contribution of individuals, groups, businesses and communities working together to make a difference to the health of New Zealand’s rivers and streams. Each year the Morgan Foundation investigates and selects projects for consideration from around New Zealand. The selection is based on four criteria: the freshwater-related challenges being addressed; the achievements so far; the extent of collaboration within the project; and the role of science. Summaries of the projects are then prepared for the judging panel which is led by a leading New Zealand journalist.

Below image:  2015 NZ River Story Award winners.  The Pomahaka farmers group (with Janet Gregory from NZ Landcare Trust) on the right of the picture.  The Wairarapa Moana Wetlands project representatives on the left of the picture.  Pictured with the River Story judge Rebecca Macfie, Listener Journalist. 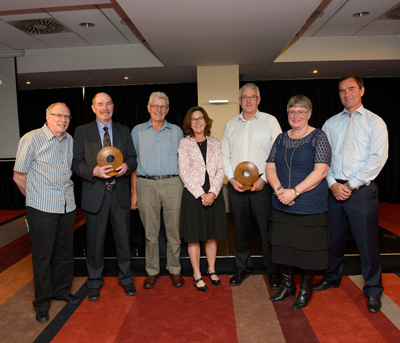 In 2014 there were three incredible finalists for the 2014 River Story Award. The winner was Bill Kerrison who has worked tirelessly for more than 20 years trapping and transferring eels and other native fish species past the dams on the Rangitaiki River in the Bay of Plenty.

A video about Bill is available below:

Runners-up to the 2014 River Story Award were two Dunedin teachers Andrew Innes and Simon McMillan. They are working to develop rigorous water testing for Otago students.  A fantastic example of young citizen science.

A video about Andrew and Simon is available below:

The other runner-up to the 2014 River Story Award was the Rangitata Gorge Landcare Group, a farming community that has taking on a war against pest plants that threaten their grand, braided, glorious river in Canterbury.

A video about the Rangitata Landcare group is available below:

The Silverstream Care Group is a collaboration between members of Upper Hutt Forest and Bird and the Silver Stream Railway. The group formed in 2003 to restore Hull’s Creek which runs through Wallaceville, Heretaunga, Silverstream, Pinehaven and the Silverstream landfill. They are working to improve the habitat of the stream for fish and aquatic insects and to create a corridor of native plants for birds.

The Sherry River catchment is the location of a collaborative research project known as the Integrated Catchment Management Motueka Research Programme (ICM). The programme ran from July 2000 until September 2011.

The aim of the ICM research project was to identify best practices for land and water use in areas where these resources were or could be used for a variety of interacting and potentially conflicting purposes. The Sherry River catchment was ideal for the research as it had different types of farms and forestry in place and the water resources were used for commercial, recreation and cultural activities.

For more information on the 2013 River Story Awards can be viewed here.

The core idea of the Most Improved River Awards is to celebrate rivers and streams which are showing long term trend improvements in water quality. Judging is done by a panel of scientists using long term data stored on the LAWA website LAWA.org.nz. In a typical year data from over 600 monitoring sites is considered.

Each year the variable used to identify trend improvement changes – in 2013 the variable was E-coli, in 2014 it was dissolved reactive phosphorous or DRP and in 2015 it was dissolved inorganic nitrogen or DIN. In order to ensure the trend estimates are robust, the judges only consider rivers for which, at a minimum, 10 years of monthly data is available. Once contenders for awards are identified information about action on the rivers is collected so the judges can be sure the trend improvements credibly reflect deliberate protective or restorative work, and are not simply due to climatic changes or other accidental factors.

Depending on the variable, some regions are not contenders for an award because they only collect data quarterly or have only recently begun testing rivers for this variable.

The Supreme Award for 2015 went to the Ngarara stream in Greater Wellington. Second place went to Mangapapa Stream in the Manawatu and third place went to Lucas Creek in Albany, Auckland.

The factors helping this stream are many and diverse. There have been improvements in the way nearby town sewage is treated. During the past decade an older system of using oxidation ponds has been superceded by one of the most advanced sewage treatment processes in New Zealand. Livestock numbers have declined as land use has gradually moved from farming to lifestyle blocks and new urban development. And over the past 15 years a major wetland upstream of the monitoring site has been the subject of intense restoration works involving weed removal and the planting of thousands of seedlings. The area is now subject to a QEII covenant. 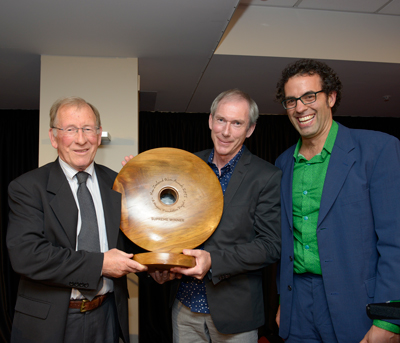 This stream runs through a rural catchment where dairy farms are common. The catchment is a priority one for the catchment and as a result farmers have been offered free farm plans. All farming in the catchment is now a consented land use activity, and to get a consent farmers must put in place measures to reduce nitrogen leaching below 2012/13 levels. Maintaining minimum flows has been a problem for this stream in the past. However, better management of water off-takes has resulted in more stable flows, which has helped to improve water quality and general river health.

The local Council commissioned extensive erosion control and restoration work on this urban creek in 2008. The work included stream widening and bank shaping, rock riffles, a rain garden, planting 10,000 trees and creating two wetlands. The rain garden and wetlands are designed to remove harmful bacteria and nutrients from water before it enters the stream. Water quality across a range of indicators has improved following the erosion control work. The gradual development of unused land upstream is likely to have helped improve water quality too.

More information about the 2015 winners of the Most Improved River Awards is available here.

The judges report for the 2015 winners of the Most Improved River Awards is available here.

Regional winner and, as the most improved river in New Zealand, winner of the Supreme Award. Its catchment includes the outskirts of Christchurch and until the middle of last decade semi-treated sewerage from the Belfast waste-water treatment plant was discharged into the river.

Diverting that sewerage to the main Christchurch sewerage treatment plant is the prime reason for the nearly 38% reduction in dissolved reactive phosphates in this river over the past ten years. But it’s not the only reason. For the past ten years the park ranger at The Groynes Reserve, Arthur Adcock, has worked with the landowners along the river to fence and plant the river banks.

More information on the 2014 awards can be viewed here.

In 2013 the Supreme Award went to Shag River in Otago and third place went to another Otago river, the Waikouaiti. Second place when to Harris Creek on the Westcoast.

Regional winner and, as most improved river in New Zealand, winner of the Supreme Award. From being almost dead in 1999 following a severe drought the river has become a good trout fishing river. Progress has been achieved partly as a result of the Regional Council setting minimum flow rates for the river and making all water off takes for irrigation subject to that limit. That has led to more even river flows throughout the year. Another very important factor has been activity by the farmers in the catchment. Farmers have moved to keeping stock out of the river, taking less water and using what they take more efficiently.

More information on the 2013 awards can be viewed here.

This Award was presented for the first time in 2015. It recognizes an individual or group that has been an outstanding communicator about the issues facing New Zealand’s rivers and streams. 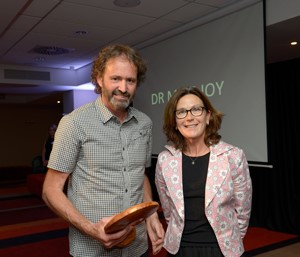 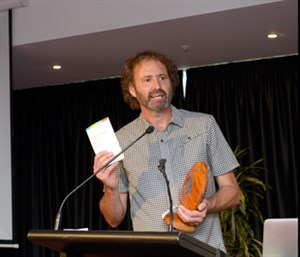