The Northland Regional Council (NRC) testing looks for bacteria used to gauge the risks of contracting gastrointestinal and other infections while using beaches, rivers and lakes for swimming, water sports and other forms of recreation.

Justin Blaikie, who chairs the council’s Water and Land Working Party, says testing will start for the summer on Monday 06 December and run until Monday 07 March next year.

Hundreds of samples will be taken from 41 popular coastal sites and 17 freshwater locations across the region with results posted on the ‘Can I Swim Here?’ section on the national environmental reporting website LAWA – www.lawa.org.nz

Weekly results are also forwarded to the Whangarei, Far North and Kaipara District Councils, the Northland District Health Board (DHB) and other interested parties.

“We let the health board and relevant district council know of any results showing elevated bacterial levels, typically within 48 hours, and it’s their responsibility to take any further action needed,” Cr Blaikie says.

Councillor Blaikie says cost considerations mean the council can’t monitor every swimming sites in Northland and typically those areas that aren’t were either used infrequently compared to others or had been officially deemed unsuitable for swimming.

“In the latter cases permanent health warning signs have already been installed, for instance Hatea at Whangarei Falls and Kerikeri at the Stone Store.”

Councillor Blaikie says improving the region’s water quality and tackling sedimentation issues are top priorities for NRC and this is reflected in the fact it has increased its environment fund by half a million dollars a year starting in 2022 with the additional funding being earmarked to catchment restoration.

“We have also established a quarter of a million dollar a year fund to give effect to Te Mana O te Wai - thus greatly increasing the council’s ability to support hapu in restoring the mauri of waterbodies across the region. “

He says both these funds also will enable the council to leverage central government funding for improving water quality, a space the council has been very successful in.

Councillor Blaikie would also like to acknowledge landowners and community organisations who are working very hard to turn around the health of our freshwater ecosystems.

“In my five years as a councillor I have seen a sea change in attitudes and commitment to this environmental challenge.”

Ricky Eyre, the regional council’s Coastal and Water Quality Field Operations Manager, says last summer 96% (551 out of 575) samples at coastal sites and 72% (169 out of 235) samples at freshwater sites over summer met national ‘guideline values’, meaning they were considered suitable for swimming.

“Results can vary quite substantially following rain which can carry run-off from land, although obviously that was less of an issue during last summer’s very dry conditions”.

Mr Eyre says the council advises people not to swim for two or three days after heavy rain, or if there are warning signs indicating unsafe water.

“As a rule of thumb, don’t swim if the water looks dirty or murky, smells or has scum on its surface and look out for or consider any potential sources of contamination, both nearby and upstream.”

“These mostly occur when conditions are favourable, for instance with warm weather and calm conditions.”

He says while large amounts of seaweed can smell unpleasant as they rot on beaches, they’re generally harmless. In contrast, cyanobacteria blooms can pose a health risk and swimming in affected areas should be avoided.

Meanwhile, Cr Blaikie says any water quality concerns – including from people who believe they may have become ill through recreational contact with water – can be reported to council’s freephone 24/7 Environmental Hotline on (0800) 504 639. 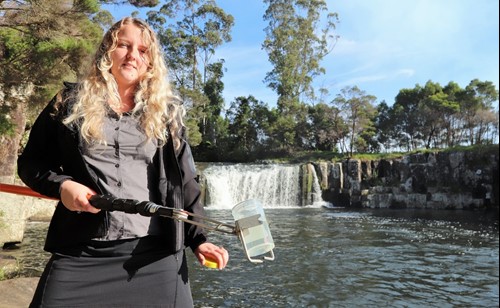