A joint three-year programme which aims to improve water quality in four of Whangārei’s key urban river catchments will begin in earnest shortly.

The roughly $500,000 ‘Whangārei Urban Awa’ project is a collaboration between the Northland Regional Council (NRC) and the Ministry for the Environment (MfE) targeting water quality in the Waiarohia, Lower Hatea, Kirikiri and Raumanga catchments.

As part of the new project Cr Craw says eligible landowners will qualify for an 80 percent subsidy for the work required, provided they pay the remaining 20% upfront. (The funding comes from the Government’s ‘Jobs for Nature’ funding package, so all the fencing and planting must be done by contractors.)

Andy McCall, who’s leading the Urban Awa project, says property eligibility will be determined according to existing land management practices, size, the length of riparian margin on the property and possibly slope.

Councillor Craw says the new programme comes hard on the heels of a similar three-year and three-month long initiative targeting landowners with properties upstream of the iconic Whangārei Falls which came to an end 30 September.

Landowners whose properties covered more than one hectare of grassed land – and which had a mapped waterway on them – had ultimately been eligible for funding through the recently-ended Otuihau-upper Hātea water quality project.

Thirty-nine landowners had been actively involved in the project, receiving more than $350,000 funding for combinations of fencing, troughs and/or planting.

Mr McCall says collectively there had been roughly 20km of streamside fencing completed, about 21,000 new plants in the ground and 41 stock troughs installed.

“Whitebait Connection also ran multiple public planting events over the same period, with more than 8200 native riparian plants in the ground on public reserve land in the catchment.”

Under the Government’s new stock exclusion rules, pigs must be fenced out of all permanent or intermittently flowing waterways wider than one metre on low slope land from 01 July 2023. Similar fencing rules for cattle and deer will take effect from 01 July 2025. The fencing must create at least a 3m buffer strip between the top of the bank edge to the fence. 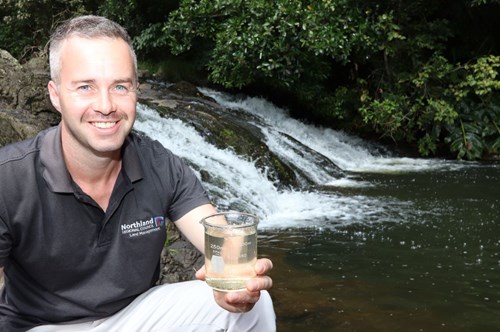 Project lead Andy McCall at Whangārei’s Raumanga Falls, which flows into one of the four catchments at the heart of the new Whangārei Urban Awa programme.