The Northland Regional Council (NRC) testing looks for bacteria used to gauge the risks of contracting gastrointestinal and other infections while using beaches, rivers and lakes for swimming, water sports and other forms of recreation.

Council chair Penny Smart says testing will start for the summer on Monday 02 December and run until Monday 02 March next year.

Hundreds of samples will be taken from 46 popular coastal sites and 14 freshwater locations across the region with results posted on the ‘Can I Swim Here?’ section on the national environmental reporting website LAWA – www.lawa.org.nz

Weekly results are also forwarded to the Whangarei, Far North and Kaipara District Councils, the Northland District Health Board (DHB) and other interested parties.

“We let the health board and relevant district council know of any results showing elevated bacterial levels, typically within 48 hours, and it’s their responsibility to take any further action needed,” Chair Smart says.

Ricky Eyre, the regional council’s Coastal and Water Quality Field Operations Manager, says last summer 95.3 % (607 out of 637) samples at coastal sites and 61.9 % (120 out of 194) samples at freshwater sites over summer met national ‘guideline values’, meaning they were considered suitable for swimming.

“Results can vary quite substantially following rain which can carry run-off from land”.

Mr Eyre says the council advises people not to swim for two or three days after heavy rain, or if there are warning signs indicating unsafe water.

“As a rule of thumb, don’t swim if the water looks dirty or murky, smells or has scum on its surface and look out for or consider any potential sources of contamination, both nearby and upstream.”

“These mostly occur when conditions are favourable, for instance with warm weather and calm conditions.”

He says while large amounts of seaweed can smell unpleasant as they rot on beaches, they’re generally harmless. In contrast, cyanobacteria blooms can pose a health risk and swimming in affected areas should be avoided.

Mr Eyre says any water quality concerns can be reported to council’s freephone 24/7 Environmental Hotline on (0800) 504 639. 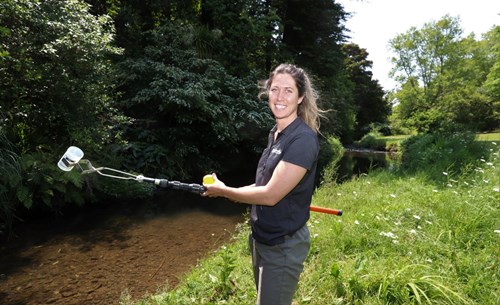