The project is co-funded by the Ministry for the Environment’s Freshwater Improvement Fund and Northland Regional Council (NRC), each contributing $782,697 to this remedial work as part of its wider commitment toward improving regional water quality.

The Ministry’s fund focusses on waterbodies in vulnerable catchments that are showing signs of stress, but which crucially have not yet reached a ‘tipping point’ when it becomes more expensive and more difficult to restore them to good health. 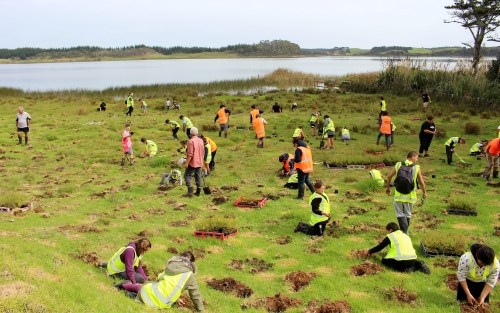 Many hands…Lake Waiparera on the Aupouri Peninsula is one of a number of Northland dune lakes being targeted to restore water quality and protect biodiversity, though fencing, planting and other work with the support of local communities.

Bruce Howse, the NRC’s Group Manager – Environmental Services, says the dune lakes project include initiatives to reduce nutrient levels – including fencing to keep stock out and associated reticulation to provide stock water – as well as work to remove and control pest fish and water weeds.

“These all involve a strong degree of collaboration between our council, central government, local iwi and our primary sector with a shared goal of improving freshwater quality.”

Mr Howse says the most recently-completed work has occurred at Lakes Wahakari and Waiparera in the Far North, as well as Lake Shag and privately owned Midgley’s Lake, the latter two both in the Kai Iwi Lakes area.

“Lake Wahakari covers roughly 90 hectares and is a water source for some in for the Te Kao community, so the fencing work along its northern lakefront which has stopped stock access is long overdue and a big win for the wider community.”

“Other work being carried out at Waiparera includes pest fishing and eradication of the invasive water weeds Lagarosiphon and Ceratophyllum.”

“We’re also considering adding this lake to our quarterly water monitoring schedule to track future water quality improvements and Te Roroa is also investigating the potential of planting out a large area between the fence and the lake, which if it goes ahead would also contribute to improved water quality.”

Lastly, Midgley’s Lake has been reticulated with intentions of fencing it through separate regional council funding later this year.

“This is a lake where council is also targeting grass carp removal over the next three years, so these three actions collectively should help improve water quality.”

Further information on the project aiming to restore water quality and protect biodiversity in Northland dune lakes is available online via www.nrc.govt.nz/dunelakesproject