Southland water enthusiasts are urged to be vigilant about keeping their equipment clean, in an effort to prevent freshwater pests like lake snow from spreading to more of the region’s lakes and waterways.

Recent samples taken from the North and South Mavora Lakes have tested positive for the slimy algae Lindivia intermedia (lake snow), which is already present in Southland in Lakes Manapouri and Gunn.

Environment Southland biosecurity team leader Randall Milne said the council doesn’t regularly monitor the lakes for lake snow, however there was evidence to suggest lake snow had gotten into the lake.

Although lake snow is not toxic and poses no known human health risk, it can create costly problems for water users. If it gets into residential water supplies, lake snow can cause blockages, clog filters and affect household appliances connected to the water system.

On lakes, fishermen may find the algae accumulating on their fishing lines and lures. It can also stick to boat hulls and equipment, wetsuits and your skin or hair if you come in contact with it.

Te Anau Fish & Game officer Bill Jarvie said the discovery was a reminder that all freshwater recreationalists need to Check, Clean and Dry to help minimise the spread of invasive species.

“Southland lake anglers have not experienced the incidences of trolling lines being clogged as seen in Otago’s lakes, but we need to take this issue seriously if we value the great fishing we are experiencing right now.

“Everyone must clean or totally dry boats and gear between waterways, regardless of whether there are visible signs of contamination or not.”

The origins of lake snow are unknown, according to Phil Novis from Landcare Research, one of the leading scientists in NZ for freshwater algae.

“Lindavia intermedia is known to be an introduced species that has appeared in New Zealand lakes in the last few decades, and is apparently continuing to spread. Recent investigations of Southland lakes suggest that humans are very important vectors since the lakes where the algae is found are readily accessible by vehicle.” 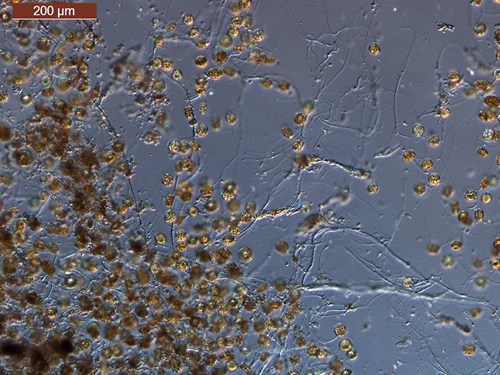